Since it was first awarded in 1984, the Turner Prize has never failed to spark debate. Here we answer some of the most common questions about the Prize by taking a closer look at the artworks and artists who have been nominated for it.

With My Bed, Tracey Emin turned one of her life’s great low points, a bedbound drinking spree, into a theatrical arrangement worthy of Jacobean tragedy: a violent mess of sex and death.
The Guardian

Art can be difficult to define at the best of times, but the Turner Prize has often pushed the boundaries of that definition.

The 1990s was a period of growth and exciting moments for the prize. Some of the award’s most controversial artworks were exhibited during this time including the work of the Young British Artists (YBAs). This was a group of artists who initiated a different approach to art. Tracey Emin, one of the most prominent members of the group, was nominated in 1999 for My Bed. This work is a kind of self-portrait, inspired by a depressive period in Emin’s life when she spent four days in bed only consuming alcohol. My Bed attracted huge media attention and even after two decades, it still remains one of the most notorious works in the history of the Turner Prize.

Martin Creed, another celebrated member of YBA, won the award for Work No. 227: The lights going on and off. This artwork consists of an empty room which is filled with light for five seconds and then plunged into darkness for five seconds. The critics were divided in their outrage and admiration.

Take a bare white room with a light switching on and off and what have you got? A Turner Prize winner.
Tom Parry, the Mirror, December 200

Martin Creed
The lights going on and off 2000
© Martin Creed. Photo: Tate Photography

A prime example is No Woman No Cry by Chris Ofili, who won the prize in 1998. The painting is a tribute to the London teenager, Stephen Lawrence who was murdered in a racist attack in 1993. Look closely at this work and you'll see that the tears shed by the woman contain collaged images of Stephen Lawrence’s face. The words ‘R.I.P. Stephen Lawrence’ are just visible beneath the layers of paint.

Lubaina Himid, 2017 winner of the prize, is another artist who does not shy away from exploring themes like race, identity and colonialism. Her piece A Fashionable Marriage is a satirical and political take on a scene from Hogarth's 18th Century series Marriage A-la Mode. For this work, Himid has painted images of black slaves and aristocrats - some of whom are vomiting at the news of the abolition of slavery. The judges praised her 'uncompromising' dedication to 'tackling issues including colonial history and how racism persists today.'

Jeremy Deller and Mark Wallinger are among several other Turner Prize winners whose works are noted for their blunt social commentary and strong political aspect.

Some critics are concerned that the Turner Prize does not pay enough attention to more traditional art forms such as painting. The Stuckists, for instance, are a group who believe in championing figurative painting and are against conceptual art. Indeed, since its early years, the Turner Prize has been showcasing art and artists that experiment with a variety of media and materials.

Rachel Whiteread won the Prize in 1993 with House, a concrete cast of an entire three-storey house on a road in East London. All the other houses on that road were demolished by the council since the area was going through extensive redevelopment. The work attracted lots of negative and positive attention. Some praised it for being highly imaginative and rooted in housing struggles of working-class British people whilst some called it a 'monstrosity' and ' lump of concrete'. House was also demolished by the council on 11 January 1994.

Rice? How can it possibly be used as a material for a piece of art? Vong Phaophanit argues it can. His Neon Rice Field was also nominated for the Turner Prize in 1993. The work consists of seven tons of white long-grain rice with six red neon tubes dividing it into sections. Some critics questioned the use of an art material that could feed a large number of people. Phaophanit saw the interaction of these disparate materials as a key point in understanding the artwork. It could be seen as opening a dialogue between west and east, urban and rural or suggesting many other different meanings.

Of course, painters continue to be nominated for the Prize. Lynette Yiadom-Boakye, Dexter Dalwood and Hurvin Anderson are recent artists whose paintings are as bold and contemporary as work by their fellow nominees.

The award is given to a British artist. This means an artist working primarily in Britain or an artist born in Britain working globally. One of the ongoing debates around the Prize has been about the definition of British and how to decide on who is British and who is not. As the meaning of Britishness has changed and evolved in our society, the Turner Prize has tried to reflect this.

Giuseppe Penone, an Italian artist, was the first nominated artist who was not born in Britain. Malcolm Morley, the first Turner Prize winner, was a British painter working and living in New York. At the time of the award, he had not been in the UK for years. Wolfgang Tillmans received media attention in 2000 when he became the first winning artist who had not been born in Britain. Nicholas Serota, Tate’s director at the time, responded to this debate:

We have never confined the idea of British art to those who have been born in this country. At a time when there is a great deal of debate about public migrants, we should be in the forefront of those pointing out the huge contribution they have made to this country … If the Turner Prize had been around in the 1740s, I hope that Canaletto would have been on the shortlist.

It is not difficult to define who the creator of an artwork is most of the time. Collaboration is, for some, an important part of the creation process. The Turner Prize has been showcasing works by artist groups and collectives since its early days and has questioned rigid ideas about authorship.

Gilbert and George are an artist duo who won the Prize in 1986, while the Chapman Brothers have also been nominated. In 2010 The Otolith Group were nominated for their project A Long Time Between Suns. Their collaborative practice questions the nature of documentary history across time by using material found within a range of disciplines, in particular, the moving image.

Assemble were the first collective to win the prize in 2015. They are a multi-disciplinary group, consisting of more than 15 members, working across architecture, design and art.

They were nominated for their community project in Granby Four Streets in Liverpool. The project was based around the refurbishment of a group of houses that had been ignored for years. Assemble worked with the community to establish Granby Workshop, a social enterprise selling items for the home, some of them made from the rubble of demolished buildings.

There is a down-to-earth, no-nonsense attitude that comes in part from the mix of disciplines involved. While many of them studied architecture at Cambridge, others came from backgrounds in English, history and philosophy, or had worked as builders or technicians.
The Guardian 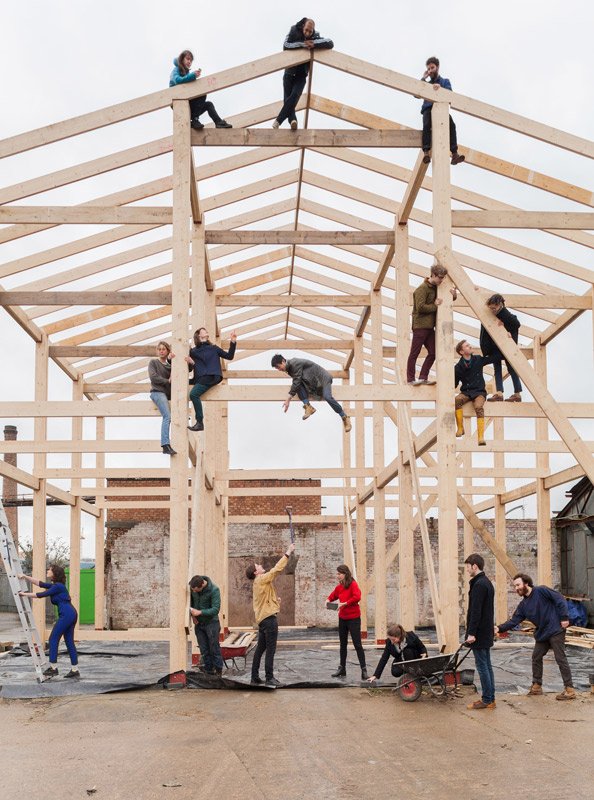